Chemistry played an important part in Stephanie and Gerald's relationship, literally! While they were both studying towards a nursing degree, the pair ended up in the same chemistry class. As lab partners, they formed a friendly bond but nothing ever came of it. They both focused on school, but kept in touch through texts. It wasn't until six years later, the pair reconnected and had an undeniable chemistry - go figure! From that moment on they have been inseparable and knew they were meant to be.
Stephanie had always wanted her proposal to involve her family, and Gerald made that happen! While visiting Disneyland Resort one day, he arranged for her family and friends to meet behind Sleeping Beauty Castle. Together the couple walked through the park and made their way behind the castle. Stephanie soon realized her family was there, and at that moment Gerald got down on one knee. He asked her to marry him, and she said "Yes!" The rest of the day was spent enjoying their love at the happiest place on earth.
There were three big reasons which led to the couple's decision to have a Disney's Fairy Tale Wedding. After a proposal at Disneyland, they shared, "We wanted to continue the journey with Disney related events!" Second, they always wanted a destination wedding in Hawaii. Third they love Disney! Aulani, A Disney Resort & Spa was the perfect choice to combine the couples wishes for their big day.
Before the ceremony began, the couple shared an intimate moment with a "first look". It turned out to be both the bride and groom's favorite part of the day. With arrangements abundant of white orchids and accents of purple and pink, Stephanie and Gerald said their "I dos" at  'AMA 'AMA Patio overlooking the ocean. From the breathtaking Hawaiian view to the reception full of dancing and laughter, the couples happily ever after was a dream come true. They even continued the journey with a honeymoon on board the Disney Cruise Line! 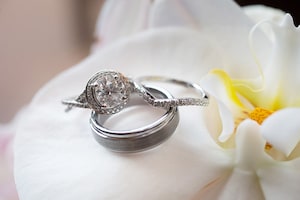