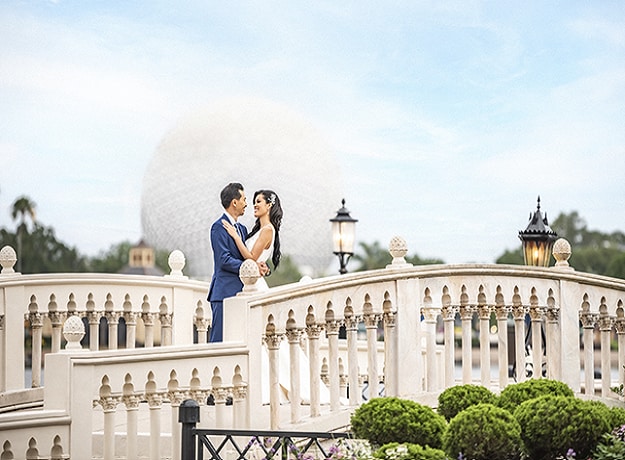 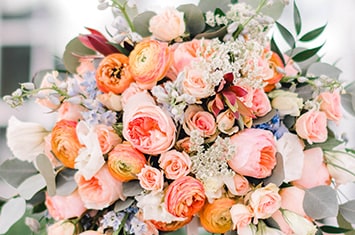 Tailor your event from an array of options for photo and video, floral, entertainment and transportation.

Create the perfect ambience for your special day and make it uniquely you. Your Disney Weddings Specialist will be there every step of the way to help you choose the details that make your wedding the best reflection of you!

PHOTOGRAPHY
Relive the magic of your day—including all of your favorite moments—with help from our professional photographers.

Each photograph package includes a skilled photographer who will capture the special moments of your day. Some packages will also offer a second photographer.
Read More

VIDEOGRAPHY
Capture all the moments of your happily ever after with an incredible video of your special day. Your film will showcase all the magic of your Disney wedding for all to see. See a list of our preferred Videography options.
Read More

SPECIALTY PORTRAIT SESSIONS
Pose for a portrait session in bridal attire at a Disney theme park or scenic Disney Resort hotel for a one-of-a-kind experience offered exclusively by Disney’s Fairy Tale Weddings.
Magic Kingdom Portrait Session
Step into a fairy tale as you and your loved one showcase your love against the backdrops of Cinderella Castle and the Beast's Castle. This truly once-in-a-lifetime experience makes your dreams of becoming a princess come true. EPCOT, Disney’s Hollywood Studios or Disney’s Animal Kingdom Theme Park Portrait Session
For a photo session with character, travel to distinctive world destinations at EPCOT, picture yourself in the pictures at Disney's Hollywood Studios or embark on an exotic adventure at Disney's Animal Kingdom Theme Park. Walt Disney World Resort Portrait Session
Allow the Victorian elegance of Disney's Grand Floridian Resort & Spa to serve as a spectacular photo backdrop, followed perhaps by the lush tropical gardens of Disney's Polynesian Resort. Pose in a range of picturesque places at several Walt Disney World Resort hotels.
Read More

Bouquets
Express your personality and sense of style with the perfect bouquet. Our floral designers will help you choose the bouquet that best reflects you. Choose from many available styles or create your very own. Be sure to ask your Disney Wedding Specialist for more information.
View Gallery

Wedding Party
Add just the right touch of color and panache by working with our floral designers to create boutonnieres, corsages and bouquets for bridesmaids that complements the wedding theme.

Floral Enhancements
Create the wedding of dreams—down to the last petal. Once you meet with your Disney Wedding Planner, we'll arrange an appointment with one of our designers to discuss your floral wishes for your ceremony and reception.

Music
Choose from a wide variety of classical musicians, lively bands and happening DJs to bring the perfect flair to your event. Ceremony Soloists and Duos

Themed Entertainment
Create a fun atmosphere for you and your guests! Vibrant, private fireworks or confetti canons add a burst of color to your event. If you prefer a theatrical touch, actors arrive in character to make you feel like royalty or to provide comedic relief. Sparkling Extras

Delightful Disney Characters
Make your reception most definitely Disney and delight guests of all ages by adding an appearance by some of your favorite Disney pals.

Select from a variety of Disney Characters, including Mickey and Minnie, and ask your Disney Wedding Coordinator about other character options available. Whomever you choose, their attendance is sure to cause a stir and make for wonderful photo opportunities.

Choose up to 2 Disney Characters, bookable in 30-minute increments.

Disney Characters are subject to availability. Specific Characters may not be available.
Read More

Cinderella’s Coach
Make your childhood fantasies come true! Live out the fairy tale by arriving at your ceremony in Cinderella's Coach. Pulled by stately ponies, your magical coach will be skillfully guided by a driver and 2 footmen in full regalia.

Horse-Drawn Landau Coach
Give your wedding a regal touch by traveling to your ceremony in our horse-drawn Landau coach. This beautiful white coach is drawn by a single elegant quarter horse with a driver dressed in an authentic morning coat.

Motorcars
Arrive in style! Choose between a limousine, a vintage Ford Model A or a vintage Rolls-Royce to add a touch of glamour and elegance to your day.

Guest Transportation
Your guests can arrive in style and comfort too. Motor coaches will pick them up at designated locations within Walt Disney World Resort, take them to your wedding events and drop them off at their hotels afterward.